Posted by Christopher at 5:01 AM No comments:


Coffee nips, spaghetti on Styrofoam plates, Planters peanuts, Hi-C, Micro Magic French Fries and Dixie cups in the freezer - These are some of the fond childhood memories my cousins and I have of visiting my grandmother on Upland Street.

Grandmom would always greet us with a big smile on her face. She had a record player in the living room and would play songs like: “Putting on the Ritz, Grandma got run over by a reindeer, and YMCA.” She loved to sing and dance with us. Her house was a children’s paradise. The typewriter and building blocks in the basement, the train tracks running through the backyard, someone feeding us juice and I even think I took a sip of beer once – what a loving place for a child to explore.
Grandmom would hand us money just about anytime we saw her and hide eggs at Easter filled with dollar bills and candy. She was once quoted in the newspaper saying – “my grandchildren keep me young.” She loved our company and we loved hers.

When I was five, I asked my mother, “Is Grandmom El our great grandmother?”
My mom asked, “Why do you say that?”
I replied, “Because she's so great to us.”

While we kids were exploring the backyard and basement, our family and friends would gather around the living room table, enjoying conversation and a Meister Brau with Grandmom. She loved her beer. In an article from the Philadelphia Inquirer, celebrating her 80th birthday (in 2003), the author of the article wrote, “When the rest of the world ran out to buy water and duct tape to gird for a terrorist attack, Eleanor bolted to the liquor store and bought two more cases of beer.”
Years later, she would move to Lansdowne Ave. That was when things began to change. She was still Grandmom, but she wasn't drinking anymore. I remember being surprised at how well she took that. She was still taking SEPTA to get around though. She loved taking SEPTA wherever she had to go – the 13 trolley to work or taking my mother as a child on the bus so she could see the smashed up cars at the junkyard.

Earlier this week, I found out the before the 1970s, Grandmom actually wasn’t a grandmother. Hard to believe, right? Before that time, she was a dedicated wife and a loving mother, working at Sunray Drugs and Penn Mutual to help support her family. She was Aunt Winnie. In her downtime, she enjoyed playing the lottery, watching game shows, and listening to Dean Martin. She enjoyed smoking cigarettes. “I wasted matches,” she said. “No sooner was I lighting one then lighting another one.”

And, before 1946, she wasn’t Grandmom or Mom. She was Eleanor, working at the family restaurant at 2nd and Chestnut, and dating my grandfather. “Whenever I wanted to talk with him, I’d call his house and ask ‘Did you call me?’ ‘No.’ ‘Oh, well, someone called me, but they didn’t leave a name so I thought it was you.’” She was a witty, young girl, the daughter of Helen and Charles, enjoying life on 57th Street.

And by the good grace of God, she spent her final years a few blocks from where she grew up and where she was married – here, at Little Sisters of the Poor. Just last month, I stopped to see her a few times. Over ice cream, we would discuss her past – her father’s police beat in West Philly, her mother from Mahanoy City. We talked about the shore – she would help her sister at B&B cold cuts. During down time, Pop-pop and the girls liked the beach, but she loved the boardwalk, “Those were the good ole days,” she said.

I will miss her terribly. I already do. I hope she is gathered around the living room of heaven with Pop-pop, Aunt Lucille, Uncle Paul, GG and everyone else she loved. I hope her son Thomas is sitting on her lap. Everyone gathered around – sharing laughs, telling stories, and singing songs. If I close my eyes I can picture it. I hope you can too.
Posted by Christopher at 4:58 AM No comments:

We just returned from a quick trip to Chinatown and the Reading Terminal. God bless snow days. God bless Uber. Neither one of us felt like taking our cars out, but we both wanted to get out of the house for Dim Sum and fresh lemons.

Yesterday, I ventured to Brendan’s with Matt to watch the AFC title game. I was happy my Broncos conference play succeeded. A few of Brendan’s buddies were there and we were all equally relieved to get out of the house, stop shoveling, and watch some football.

Saturday was the day we got hit with the storm. The previous night, I ventured to the movies to watch “Anomalisa” and when I returned home, I shoveled the front and dusted off the car. By the time I left the house on Saturday afternoon to shovel again, we had at least another fifteen inches of fresh powder on the ground. I dug a walking path on our sidewalk and the neighboring sidewalks as well. Denise cooked a lot – from hot chocolate to stuffed squash to fondue pretzels, she went all out and took care of us.

Posted by Christopher at 3:06 AM No comments:

In Chambersburg, you turn the light on and off with a switch. In Eaton Hollow, you rely on daylight, fireplaces, lanterns, and flash lights (sometimes you even wear one on your head).

In Chambersburg, you adjust the water temperature from 85 to 90 by nudging a dial. When you’re finished with the shower, you point the head to the left so the next person gets sprayed when they turn it on. In Eaton Hollow, we didn’t shower.

In Chambersburg, we sat on our beds, watching television and drinking beer. In Eaton Hollow, we sat around the fireplace, having conversations and playing games.

In Chambersburg, if you had to go to the bathroom, you took a few steps. In Eaton Hollow, you walked fifty yards to the outhouse or peed on a tree.

In Chambersburg, we never turned on the heat. The temperature was comfortable enough with intermittent rain. In Eaton Hollow, we were drier and colder. There was no heat dial. You threw wood on the fire and chopped wood the following day.

A week ago today, on December 27, we took a long hike. We encountered a lumberjack and asked for his advice on pleasant sights nearby.

“Well, hell, I just don’t think we have anything like that. There’s a golf course that my daddy runs about 45 minutes away.”

“Oh well, at least we asked,” I thought.

“And, there’s the largest reservoir in the mid-Atlantic region about a half mile down the road.”

It’s incredible how he mentioned that last.

Chopping wood and wearing a flashlight on my head were two things I had never done before Eaton Hollow. Now, I look forward to doing them again.

In Chambersburg, the walk from the car to our room measured roughly forty yards. In Eaton Hollow, our walk wasn’t a walk. Our walk was a mile long hike – a winding trek that included alternating terrain: twisting woods, steep hills, and damp, leaf covered paths.

In this way, hiking was an inherent part of the Eaton Hollow trip whereas in Chambersburg, we needed to make a conscious effort to find a place to hike. In both places, setting out for hikes was done in a whimsical nature. We sort of knew where we wanted to go, but the specifics were shady.

With all these differences, I would not choose one trip over the other. I would not judge them. I will simply say they were both enjoyable and if I could go back in time, I would not change anything. I would go on each trip and let each evolve as they did: with plenty of laughs, imbibements, and spiritual moments along the way.
Posted by Christopher at 10:00 AM 2 comments:

Mondays in Nebraska and Massachusetts

Video journal of three Mondays on the road
Posted by Christopher at 6:22 AM No comments:

Video journal of three Fridays on the road.
Posted by Christopher at 3:36 PM No comments:

This was the apartment building where I lived, in the Kai Fa District of Yantai

Christopher
Philadelphia, Pennsylvania, United States
I am a traveler and a student of life - always have been, always will be. A week or two in a foreign place was never enough though. It was just a tease. I moved to China in November 2007 in order to have fun and learn a very foreign culture. I am back in Philly now, but this site is an attempt to capture some of my experiences in an entertaining manner.

Some other cool sites... 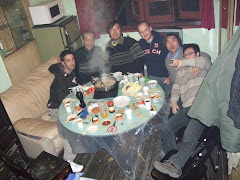 Dinner with my students This was the street I lived on in Shanghai